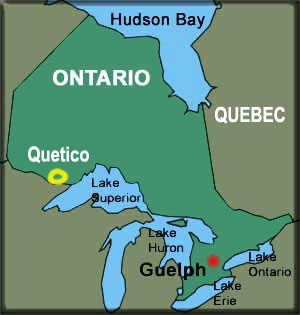 The distance from Guelph to Quetico involved two days on the road with overnights at Lake Superior Provincial Park and Dawson Trail camp in Quetico. 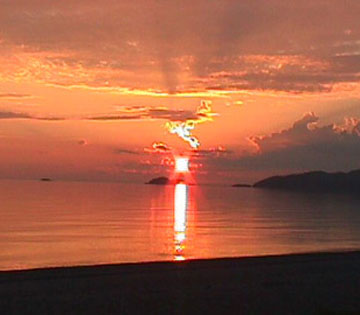 The sunset over Agawa Bay in Lake Superior Provincial Park seemed to be an omen of great things to come. Our start date for Quetico out of the Nym Lake entry point was July 25. 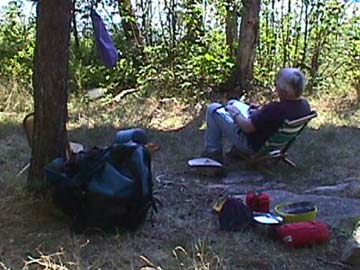 We had been told about a nuisance bear in the Maria Lake/Mosquito Point area where we had intended to camp the first night. We decided to pull up short and camp on an island in Batchewaung Bay. The 830 metre portage from Nym Lake into Batchewaung Lake, although long, was easier than we thought it would be. 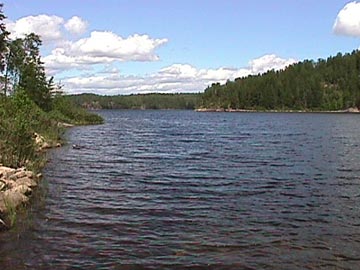 We used the sail for a bit, but the winds were calm for most of the day. So far, the weather has been excellent, with a favourable forecast for the next few days. There have been very few bugs, and the scenery has been outstanding. 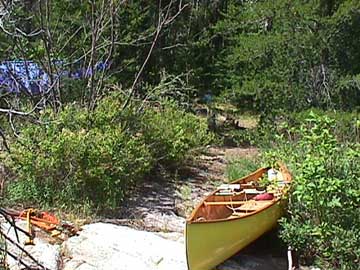 The campsites are well used, but very clean. This is a credit to other users or to the park rangers, or a combination of both. 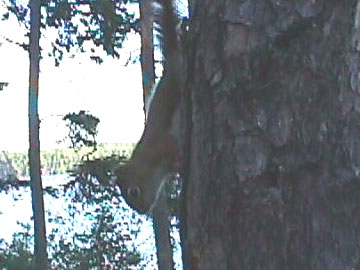 The local inhabitants were quite used to visitors. This squirrel was very persistent in checking out our gear. 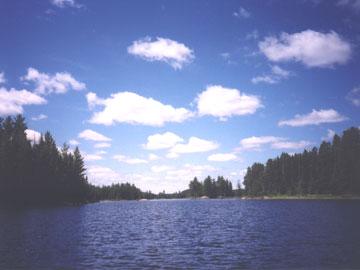 After four portages and a bit more paddling down Jesse Lake than we had intended, we camped on an island at the south end of Oriana Lake. Another great location!
A highlight of the day was a bald eagle swooping down to grab a fish a short distance in front of our canoe.
As well, a cow moose was grazing in the shallows earlier on in the morning and we surprised a whitetail deer at the Jesse-Oriana portage. 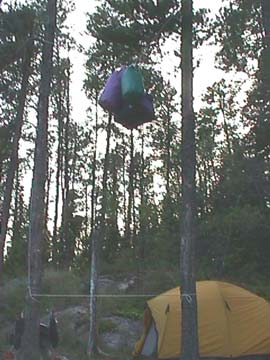 We had seen bear footprints along the portages. Even though we were on an island, we decided not to take any chances. The food was hauled up out of reach for the night. 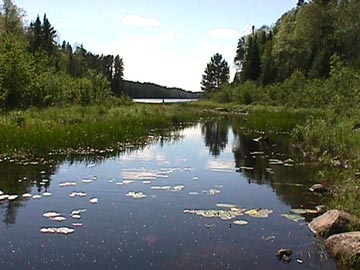 The passages between lakes were tranquil stretches of shallow grass/reed filled water. Quite a change from the openness of the lakes. 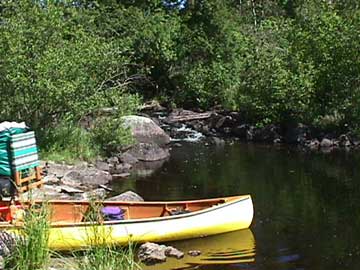 Some creeks just could not be run. The portages provided a bit of variety in locomotion. 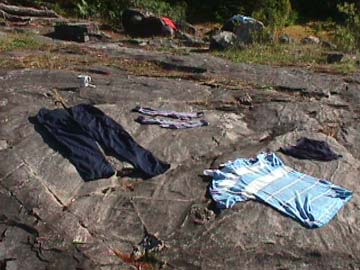 The weather was warm enough to do the laundry. The rocks dried our clothes in a couple of hours. 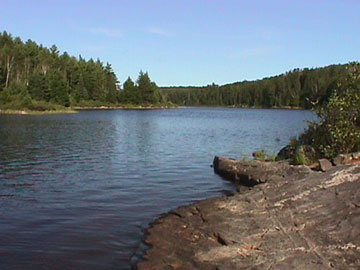 We couldn't get over how perfect the weather was. There continued to be no bugs and the nights were cool. The presence of blueberries on a number of islands added to the sensations. 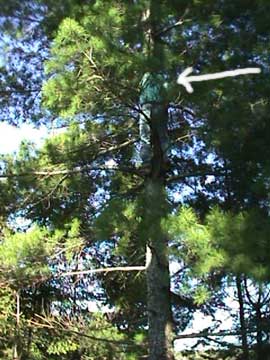 Just for kicks, we brought along a cell phone. At our second night's camp on Oriana Lake, we tried several different ways of connecting. One of these was to climb a tree. (It didn't work) 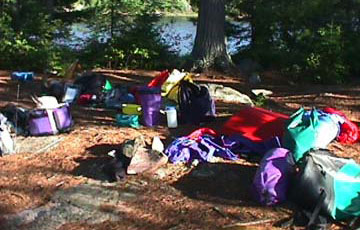 When you look at the amount of gear, it is surprising that it all fits into a canoe. 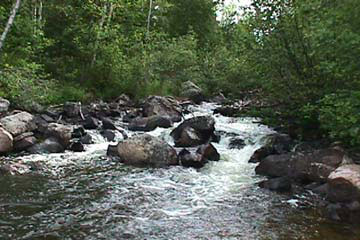 Some creeks are pretty to look at but make portaging necessary. This one would have made a good run in the spring when water levels were higher. 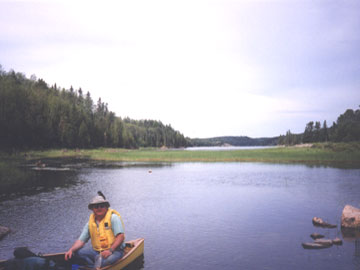 Oriana Creek was a lazy paddle through reeds, wild rice and lilies. 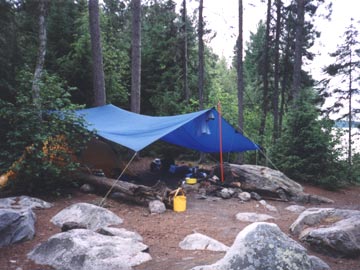 At the campsite in the narrows on Jean Lake, we had a location which was flat and breezy. An added feature to this location was the presence of a rather large snapping turtle and several eagles, three of which roosted for a while in the trees a couple of hundred metres north of our camp. 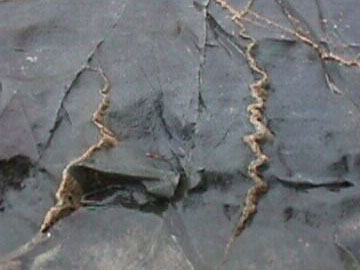 We found these raised quartz intrusions which pointed up the ability of water to erode "softer" rock over millions of years. 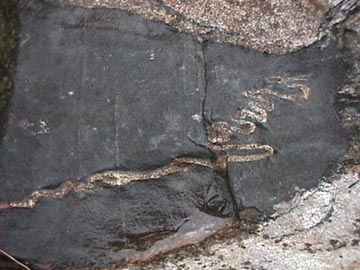 The snake-like intrusion was quite unique since the surrounding rock is of a type that when fractured, does so along straight lines. I suspect that the intrusion happened as the darker rock was hardening, rather than after the fact. 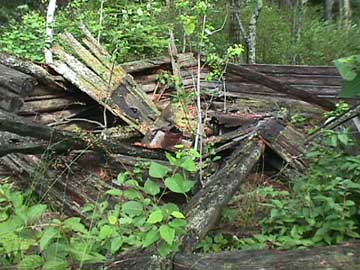 The remains of a park ranger cabin was the highlight of our portage to Burntside Lake. The chinking between the logs was done with saplings rather than mud, etc. This cabin would have been used for the monitoring of poachers in the early days of the park. 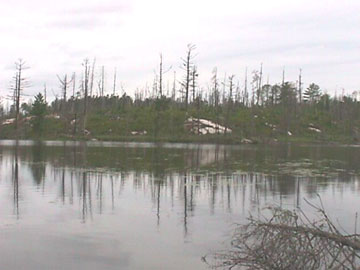 A recent fire swept through the Rouge Lake area. Already the undergrowth has started to regenerate. Only a few of the larger pine and spruce trees managed to survive the fire. Although we usually regard fire as a destructive element in the bush, it allows the regrowth of a greater variety of species. 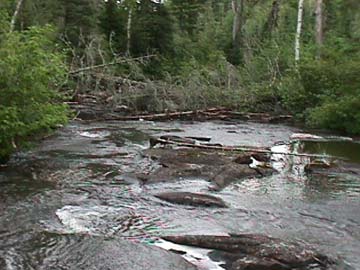 The connection between Rouge Lake and Sturgeon Lake was along Jean Creek. The north end of which was not navigable due to a wide, flat set of rock ledges which descended gradually. 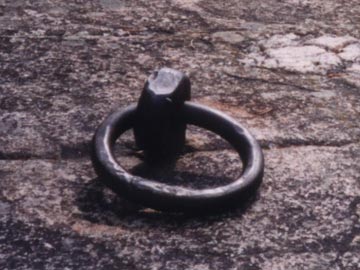 Throughout this section of the park are signs of past logging operations. This ring was probably an anchor for a log boom. 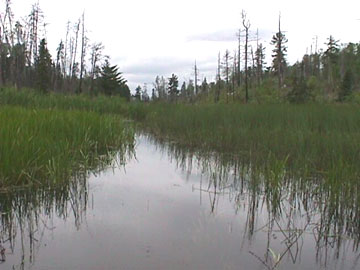 The rest of Jean Creek was a marshy paddle with a couple of beaver dams thrown in for excitement. The third portage on the maps did not materialize. I suspect that it was caused by beaver dams which ended up being pull throughs. 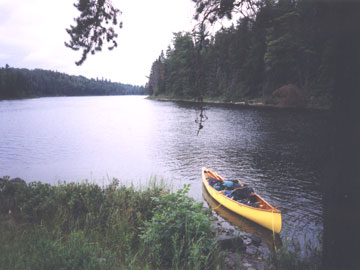 Sturgeon Lake was sadly lacking in campsites, so after a long pull up the lake, we camped on Scripture Island. It was a barely adequate campsite. The next morning, after going through the Sturgeon Narrows, we stopped on Blueberry Island for a break and some wild blueberries - delicious! 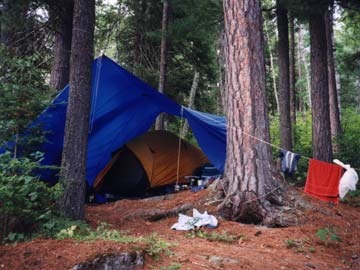 The Deux Rivières portage was ahead of us, so we camped on the northern end of the Twin Lakes. The campsite was not easily seen, but proved to be excellent. We enjoyed watching other canoe groups come out of the portage and try to figure out which way to head. 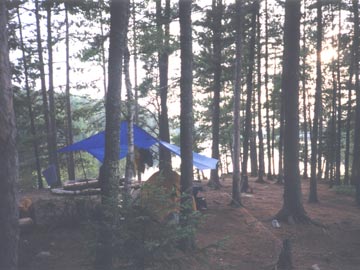 After doing the Deux Rivières and Pine portages, we decided to camp on a small island in the Pickerel Narrows. The campsite was ideal. Too ideal, as we found out later that night.


Bear Visit:
At one o'clock in the morning, we found out that the island was on the nuisance bear route. We were awakened by a crash as one of our food bags was being ripped down off the line that we had tied it to. We got out of the tent and attempted to chase the bear off, but it was really focused on the food. After about twenty minutes of noise making, etc., we decided that the bear was not going to leave. That meant that we had to. While we were packing our gear, the bear kept coming in towards us (within 6-8 metres), so we had to keep yelling it away. We finally got the gear packed and into the canoe. The island belonged to the bear.
Our losses included our utensil kit and a bit of food. Luckily, it did not get our main food bag.
We set out along the Pickerel Narrows by moonlight. The moon set after about a half an hour, leaving us to navigate with headlights and shoreline. After about two hours and 4 or 5 kilometres of canoeing in really dark conditions, we found a campsite. Still pumped by the incident with the bear, we set up the tarp and had a tea/coffee break. Neither of us could sleep, so we waited until first light.

Information about bears and how we should act when we are in their spaces > > >.
After drinking watery porridge for breakfast (no utensils), we decided to try to make it back to the Nym Lake start point. The distance was approximately 9 or 10 kilometres through Batchewaung Bay and Nym Lake. Initially, as we went through the Pickerel Narrows and Batchewaung Bays, conditions were good - a little cloudy and cool. By the time we got to Batchewaung Lake, however, the wind had picked up considerably and the sky was overcast. It was a tough pull to the island part way across. As we waited for better conditions, a really nasty squall came through, accompanied by a terrific lightning show and a green cloud bank.
At first, we were on the lee side of the island in the canoe, but decided to get off the water when the lightning strikes got close and the rain became really bad. We found a moss lined trench in the middle of the island away from the taller trees, put the tarp up, dried off a bit, and had a short snooze.
After the squall had blown over, we paddled, with substantial effort, and made it to the portage to Nym Lake. The portage had become a small creek during the storm, so it was not much fun to do. At the end of the portage, the rain was once again very heavy, so we island hopped across Nym Lake.
It is said that our lives should be in balance.
The bear and storm certainly balanced our first five days of superior conditions! 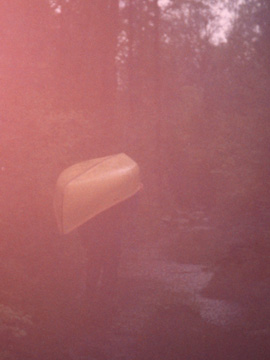 This shot of the portage (fogged lens on camera) into Nym Lake shows how wet everything was.